The 2018 elections are upon us and the Imperial Beach Democratic Club (IBDC) will continue endorsing candidates through September. In Imperial Beach, the Mayor’s position is up for re-election and there are two city council seats open. We encourage everyone to get out and vote this November.

The following list represents 2018 candidates endorsed to date by the IBDC: 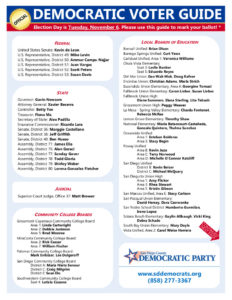